As  a first time mummy, you might at times, have this huge tendency to want to do all the baby’s preparations on your own.

Whether it’s scheduling your ultrasounds, preparing the baby’s room or making arrangements for the baby shower, don’t neglect your hubby!

Here are some ways to make sure your hubby feels appreciated, important and involved during this whole crazy process. 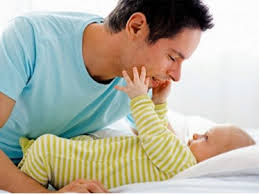 BEFORE THE BABY IS BORN

Announce the good news of the baby’s arrival together.    Skype together when you break the good news to both your parents, tag him on Facebook when you share it online or schedule a photo shoot of both of you together for a printed “We’re expecting!” announcement card.

Put all your doctor’s appointments on his calendar, especially the big ones like the first ultrasound, or the one when your baby’s gender will be revealed).  Make sure he is available before scheduling for such appointments, so he can be there to hear the heartbeat and see his baby too!  This will make him feel that it’s important that he be there too.

Work out the list for the Baby Registry together, and try not to be a control-freak!  He might prefer some items that you don’t think is necessary, and vice versa.  The point is to do it together as a team, so don’t shoot him down for his wants.

Make sure he gets a “dadchelor” party by throwing so hints to his close guy friends.  You will be getting your baby shower, so let him have his fun too at some man-centric event!

Let your man be involved with decorating the nursery (not just with the wall painting and heavy lifting stuff), and give him some bragging rights to his friends after that!

AFTER THE BABY IS BORN
Avoid Hovering
You might be cringing every time your first time daddy holds, feeds, burps or bathes baby. But as long as he’s not doing anything that could be dangerous, try to remain silent.  If you don’t give him the chance, he won’t ever figure out how to take care of his baby in his own way. Congratulate and help him along – don’t hover.
Give Him Some Fun Duties
There are certain baby things that most of us loathe doing (like the late night diaper change), but resist the urge to delegate to your hubby every single one of them. Instead, give him some fun activities to do, like singing baby a lullaby or giving her a bath. These aren’t just things he’ll enjoy doing – they’re things that will help him and baby bond.
Take A Class
We know – it’s tough to find time to get away. But if you’re taking a weekly drawing, swimming or fitness class, you’ll have a regular schedule of getting out of the house (and feeling like your old baby-free self for a little bit). And your man can have some quality time with baby to bond!