In search of a unicorn baby hamper or gifts? Try out our this unique 2-tier unicorn diaper cake! Diaper cakes are probably one of the best and most creative gift ideas that you should consider!😉 We at Diaper Cakes Singapore have everything you’re looking for!👍

This simple yet classy unicorn diaper cakes are also filled with all the necessities a loving mother would ever need through their parenthood journey. The cake looks elegant as a centerpiece for baby showers, or  full month celebrations, and is a practical and thoughtful gift for the newborn and parents.

What are diaper cakes?

They are made with usable items that mom’s can use to care for their babies once they are taken apart. Thinking out side the gift box. Basically a diaper cake is a very awesome and different way to wrap a gift for baby or a baby shower decoration.

At Diaper Cakes Singapore, our diaper cakes are created to equip parents with essentials products to help them in their parenthood journey. The cake looks elegant as a centerpiece for baby showers, or  full month celebrations, and is a practical and thoughtful gift for the newborn and parents.

These baby gift hampers are very practical and unexpected. The newborn’s parents will surely love your creativity and make them feel that you have personally handpicked the items as a special touch.💓 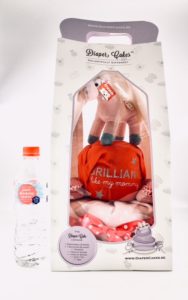 kes Singapore welcomes our precious newborn Faye and congratulate the parents Mark and Yun Wen! We also like to thank Agnes for her support

This amazing diaper cakes comes with a premium diaper cake gift box packaging as well! These boxes are easy to hold and are hygienic as well!

Diaper Cakes Singapore also delivers diaper cakes islandwide for free! If you’re looking for these beautiful hampers around Clementi and Dover , you know where to find us! 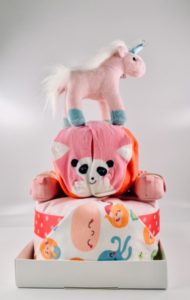 Now some fun facts about this mystical creature!

The unicorn is thought to hold the power to divine truth and will pierce the heart of a liar with its horn.

To think that this mystical creature has such a great sense of justice! How respectable and noble!

Baby Beth is super cute (and mommy too!), so as the romper suggests, Daddy’s really lucky!

Consisting of 3 layers of goodies, this 3 tier care bear diaper cake has the following inside:

The name is customized using scrapbooking letter stickers.  These stickers can be peeled off and reused to paste on Baby Beth’s cot, cupboard or bedroom door.

If you prefer something that’s more permanent, we can do heat transfer / iron-on names as well! 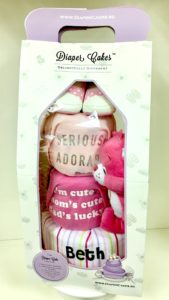 Congratulations to Kenneth and Miao on the arrival of their newborn princess Beth!

This magnificent 3 layer Diaper Cake was delivered free to Jurong East Avenue 1.  We can deliver the most unique and practical baby gift within the shortest time to neighborhood areas like Jurong, Yuan Ching and Bukit Batok.

So if you are looking for fast delivery for an urgent baby gift, look for Diaper Cakes Singapore. Baby hampers “baked” fresh and delivered free to your doorstep the next day.

Diaper Cakes are not cakes you can eat for desserts!  They are also not the disgusting kind that some folks like to joke about.  Rather, these cakes are suer adorable baby gift hampers made with disposable diapers and other useful baby wear, and shaped like a tiered cake.  Our Diaper Cakes come in different shaped and sizes, and are all packed in our impressive 46cm tall gift box that’s exclusive only to us.  For a unique, cute and practical baby gift, try Diaper Cakes!

Great Eastern Life  is one of the leading insurance companies in Asia.

What is it made of?

Made of 3 layers of goodness for baby, this diaper cake consists of the following:

Congratulations to Tammy and Qihan on the arrival with Baby Cassia. We hope she likes the items in our Diaper Cake! 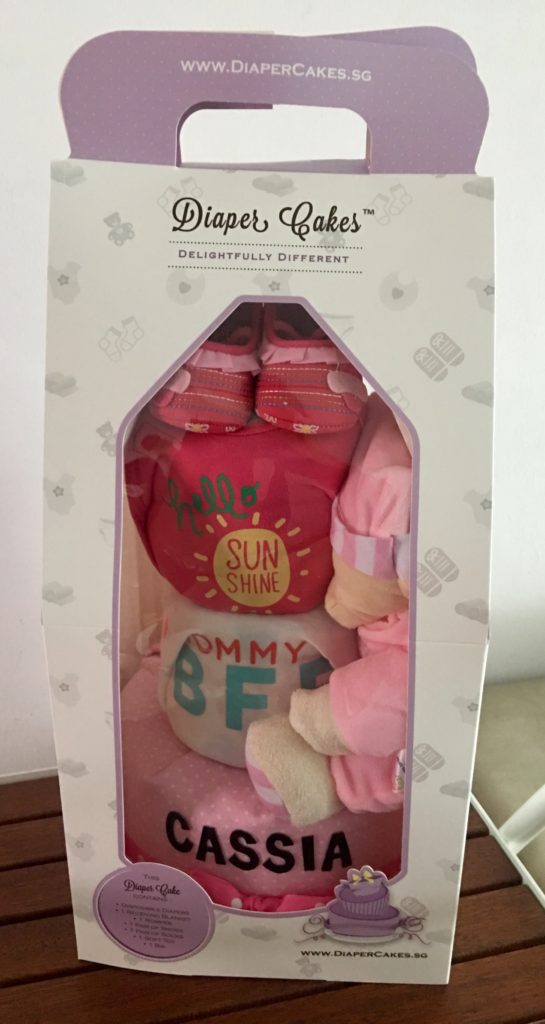 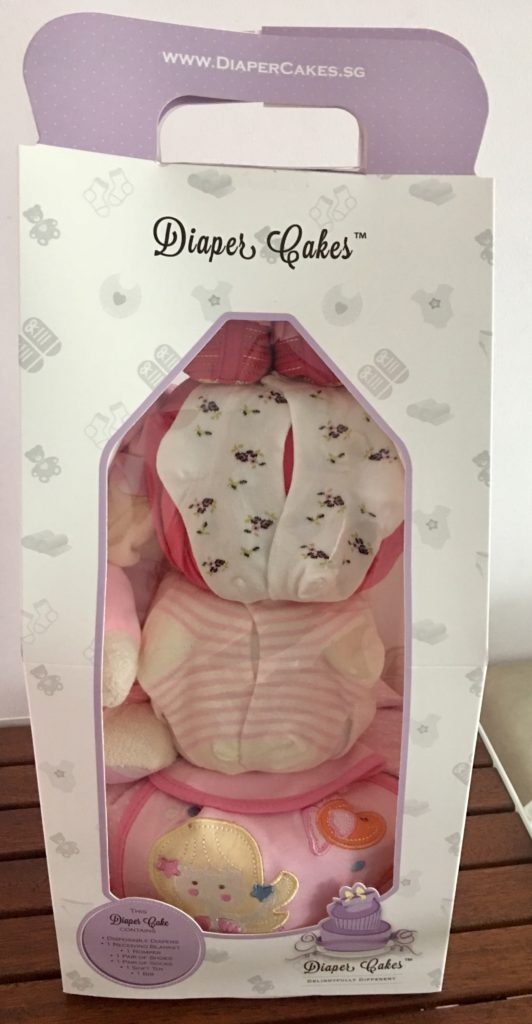 This 3 tier bedtime bear diaper cake baby gift was delivered FREE to Pine Close.  We deliver anywhere in Singapore for FREE within a 1 day turnaround time.  So if you are looking for a quick baby gift in Pine close, Geylang, Guillemard or Mountbatten area, go to Diaper Cakes Singapore!

Diaper Cakes are unique and practical baby gift hampers made with disposable diapers and baby wear, and shaped to look like a tiered cake.

All items used are useful for the new baby and looks really presentable so you, the sender, looks good too!

At Diaper Cakes Singapore, we provide next day Free Delivery within Singapore.  So if you order today, you can expect to receive your Diaper Cake the next day.  Need to send baby some love but you’re overseas? No worries! We ship our Diaper Cakes overseas too.  Shipping fees apply.

EY refers to the global organization of the member firms of Ernst & Young Global Limited, each of which is a separate legal entity.

Parenting toddlers is one of the biggest challenges anyone can undertake. It’s a chase and a battle to get your toddlers dressed, to feed them, teach them, spend time with them, clean up after them, cook for them, all the while managing work and other commitments. But we know it’s all worth it.

Every Lego on the floor cleverly missed and every tantrum skilfully placated deserves a round of applause, as with every hug given out and every other time you know you wouldn’t have it any other way.

There are some things only parents of toddlers understand.

1.  There is no manual for raising kids.

With the thousands of books on raising kids out there, you’d think that one of them would tell you exactly how to be a good parent. The truth is, no two kids are the same and no amount of books are going to tell you how to do it right. Your two-year-old could be a screaming banshee and can only utter broken sentences while your neighbour who’s got it all has a two year old who’s half on her way on finding a cure for cancer, and she can put herself to bed promptly at 9pm every night. No two kids are the same, and there is hardly any point comparing. You used to be able to stay up and sleep in, now that option is totally out.

3. Instead of running away from vomit, you run towards it.
OH NO, what could it be that’s causing your child to be sick! Better get him to the doctor immediately!

4. Silence is not always golden

Has this ever happened to you? You think you lucked out because your whole house is quiet. You think it’s the result of good behaviour, but you are scarily wrong. Not all the time, thankfully, but there have been some times.

5. The last time you looked at the mirror was with half-closed eyes while brushing your teeth.
There’s no proper time to stand in front of the mirror to preen, pose and groom. Bathroom time alone gets interrupted very easily because there’s always someone around the house or something to tend to. 7. You don’t know any adult TV shows. The only TV shows you know are the cartoons your toddler watches.
If it’s a battle of Arrow versus Peppa Pig, somehow Peppa Pig wins.

Parenting toddlers isn’t an easy thing to do, and neither is parenting new borns as well. Know a parent who’s adding on a little fellow to their family for their first time? A Diaper Cake is the perfect gift to them – it’s made of rompers, shoes, bibs and a soft toy, everything a new baby could need or want in their first few months of life.

A gift of love and consideration, what else is better?

When you have a baby, love is automatic. 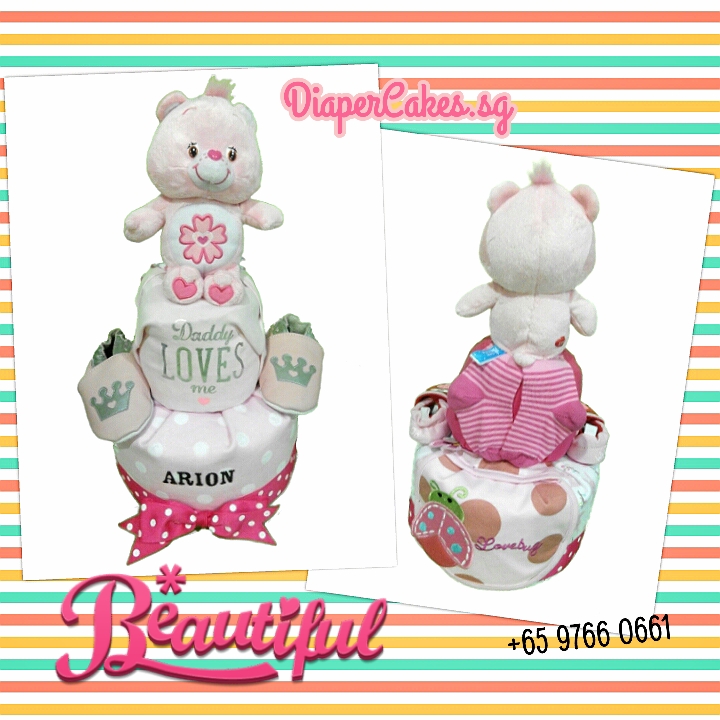 Thank you Cherrie for your support! 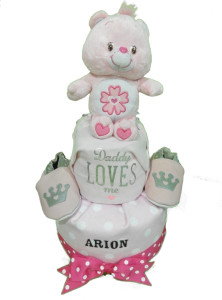 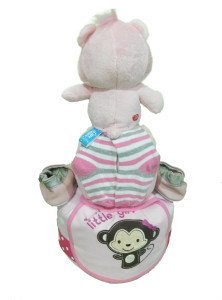 Honey is sweet. A little baby is even sweeter. 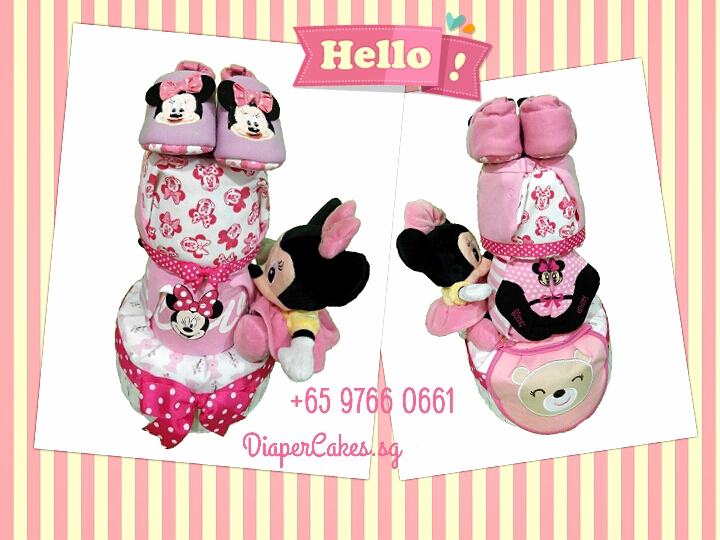 Customized with pretty ribbon and wrapped in our premium purple and white gift box for that presentable and beautiful look.

Thank you Susan for your support! 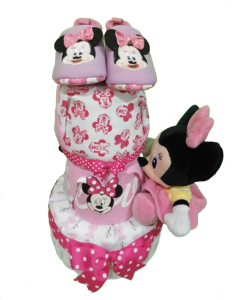 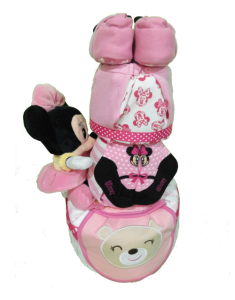 Have you heard of Diaper Cakes?  No, it’s not what’s left behind in a diaper, and it’s not a traditional cake you eat.

But a young mummy with 2 kids is cooking up a business making them, and if you have a baby shower to go to soon, one of her creations may be just what you’re looking for.

Happiness is not easy to achieve, but having a handsome husband and a beautiful baby helps. 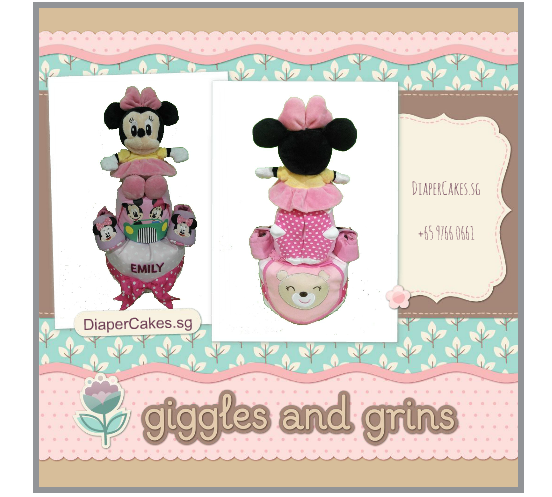 Thank you Maggie and Lena for your support! 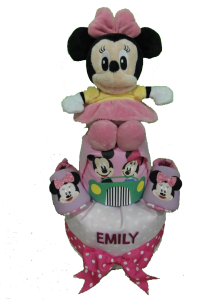 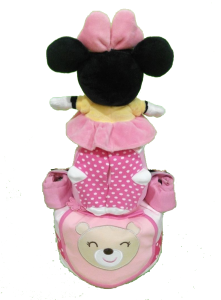 Babies should be classified as an antidepressant. It’s pretty hard to be in bad mood around newborn baby. 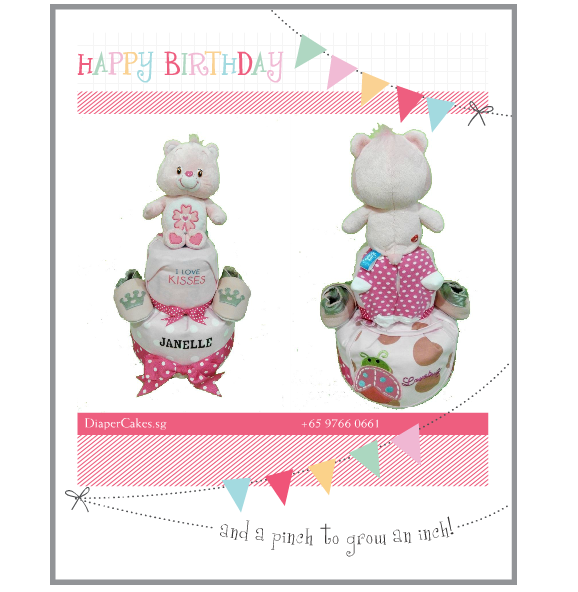 Thank you Jacklyn for your support! 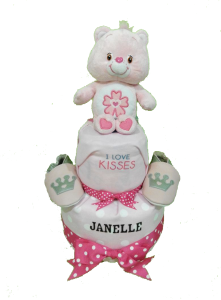 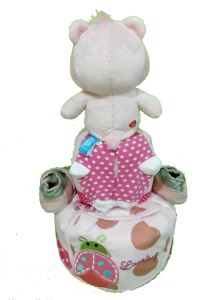 Babies refresh the life and rejoice the heart. 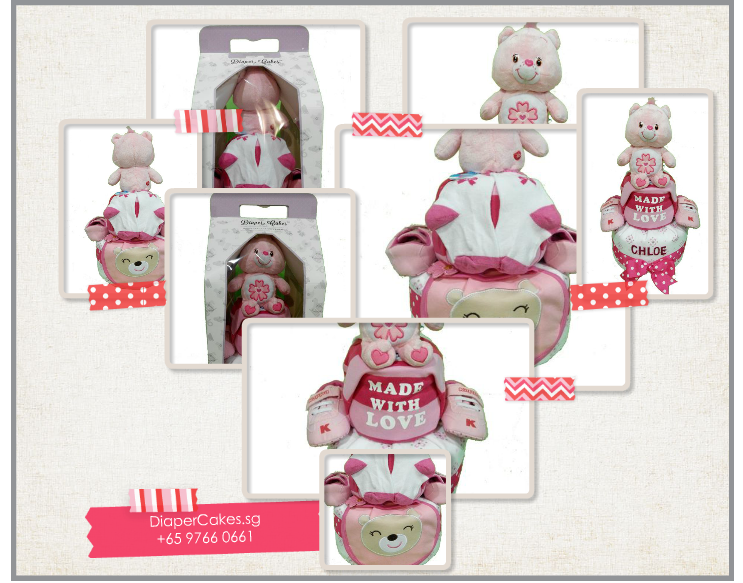 – 1 Short Sleeved “Made With Love” Romper

Thank you Jennifer for your support! 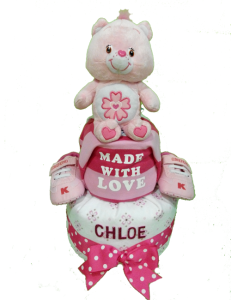 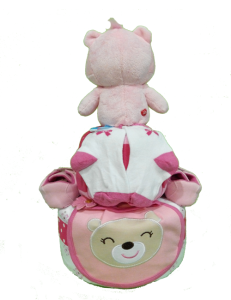 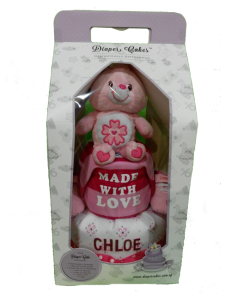 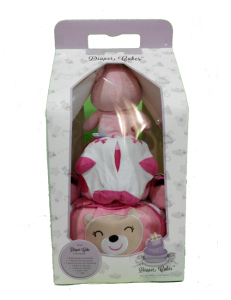 When a baby smiles at you she is thinking she’s gonna have the best life ever with her mommy and daddy. 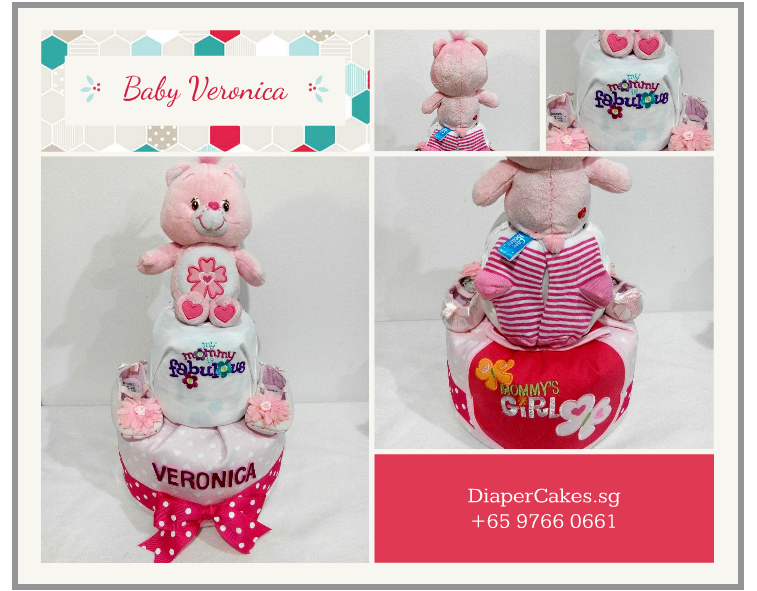 Thank you Audrey for your support! 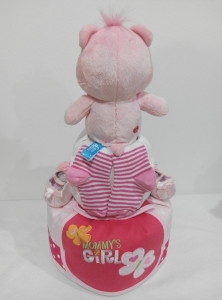 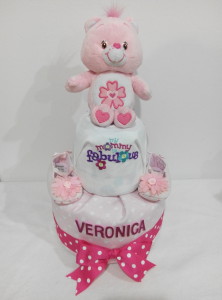 Same day delivery available as well. Contact +65 9766 0661 or email us at contact@diapercakes.sg